Disqus is everywhere. And it does the job: insert a <script> tag and even a simple HTML page gets a comment system. What else could you ask for?

This is why I turned Disqus off 3 months back on this site. But I had an itch, I would still like the possibility for someone to drop comments other than personal emails or such. These are my findings.

My starting points for reviewing systems are this blog article, this HN thread and alternatives.to. Here, I will be reviewing the options in more depth.

Note: I will intentionally skip proprietary alternatives, as they typically share Disqus’s issues. By proprietary, I mean software without any open-source component. I will also omit discontinued and unmaintained projects to avoid more problems down the line.

This one sits on the edge of overkill. Discourse is a growing company that also proposes its community discussion system as FOSS. It is written in Ruby.

Expect quality software, but also some inadequacy regarding the scale of the tool. Embedding is done by creating an iFrame on the host site (example at Jeff Atwood’s Coding Horror). From there, a “continue discussion” button takes the user to a full-fledged forum. Then you have to deal with potential issues of styling, cross-origin policy, configuration, etc. I don’t think it’s worth it. 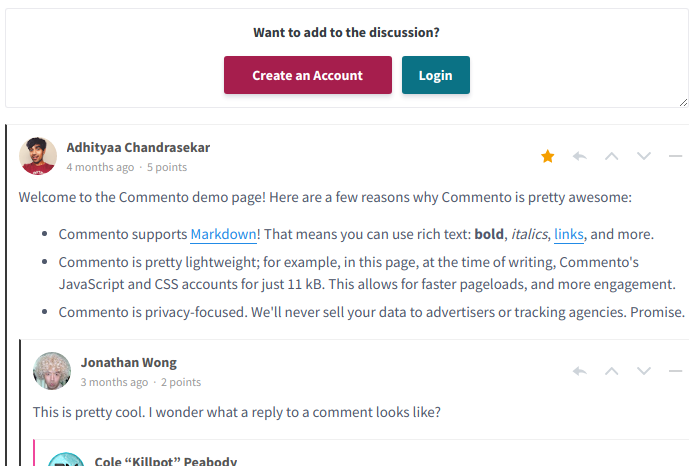 Commento has the right idea: a simple and lightweight but beautiful thread system using an embedding script. It also has a community edition sponsored by Mozilla and Digital Ocean and a docker-compose installation. Its server-side is in Golang.

Unfortunately, Commento is not production-ready just yet as of two months ago. Crucial things were either missing or not working, like admin authentication or domain creation restriction. The integration was difficult as well, despite the Docker image helping a great deal.

On the upside, the client side is the best in my opinion. Polishing the server side would easily make Commento the best option.

Schnack is even lighter than the others, with an embedding script of 8KB. It is entirely open-source and has a Docker image. Its server-side is Node.

One large pitfall lies in the need for users to authenticate using third-party services: Github, Twitter, Google or Facebook. On the one hand, this means the server-side does not need to have an authentication system. On the other, I would rather users be able to comment without using other proprietary services that may track them.

Ultimately, I almost went for Schnack but I found out too late lacked a crucial feature: editing and removing comments. An issue has been open for over a year. 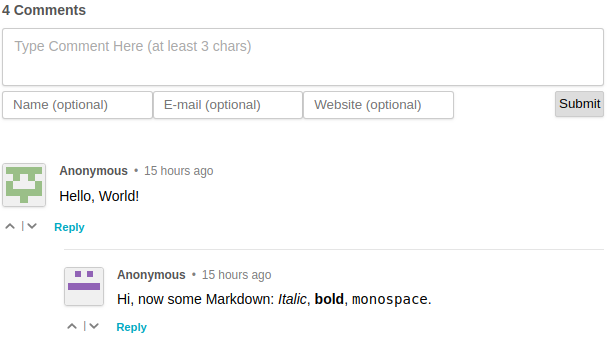 Isso is similar in many regards to Shnack: its open-source server-side runs in Docker and it has a simple embedding script.

It is different from Schnack in several regards: it is written in Python and its embedding script is heavier at 40KB, although it makes up for it by not requiring third party authentication, instead allowing anonymous comments. I actually prefer this account model, as I mentioned in opposition to Schnack’s. 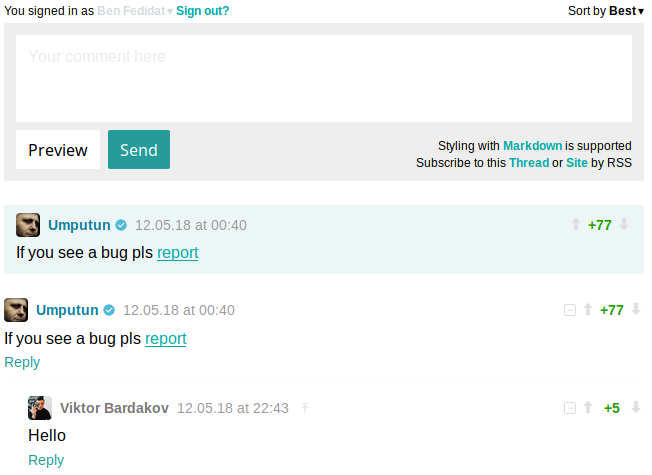 remark42 is a sleek system that is full of features. It is open source, written in Go and does a lot of things right, like privacy, styling, security or packaging. It may be installed through docker-compose, and its same author also proposes a docker image that serves virtual hosts with Nginx and Certbot for HTTPS.

The problem is that it is a very recent system, with its development first started less than a year ago. In particular, custom styling is not implemented yet, which is problematic for me since this site currently has a dark theme. 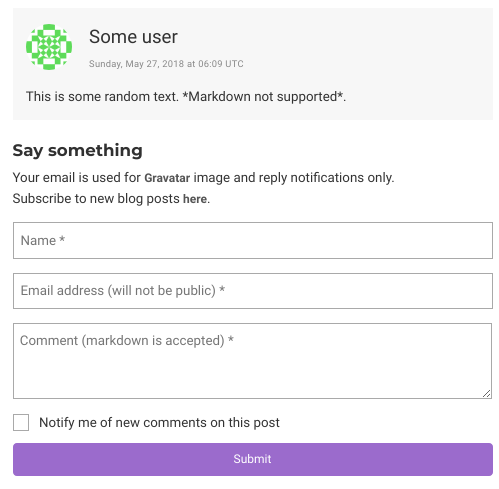 Staticman is the odd man out. It aims to provide comments - which are dynamic content - in a static fashion. Or rather, it uses Github as the server-side that generates the comments and stores them in your repo. On the paper, this is great for static sites as it means potentially not needing a personal server, for example by using Netlify (such as my site) or Github Pages.

The way this works is that Staticman has an API at https://api.staticman.net (or you can host it yourself) that your site sends POST requests to. Staticman then opens a pull request to your site’s repo.

The tricky part is that Staticman does not come with an embedding script. So you’ll have to either find someone who has done it before you (examples with Jekyll [1] [2] and Hugo [1] [2]) or do the integration yourself. Integration means implementing both the submitting and serving components. So note that the picture above may not represent your end result at all.

Another problem is that Staticman locks you in with Github. However, Gitlab support is coming soon. And since Gitlab is open-source and can be self-hosted, this would make Staticman a decent option. 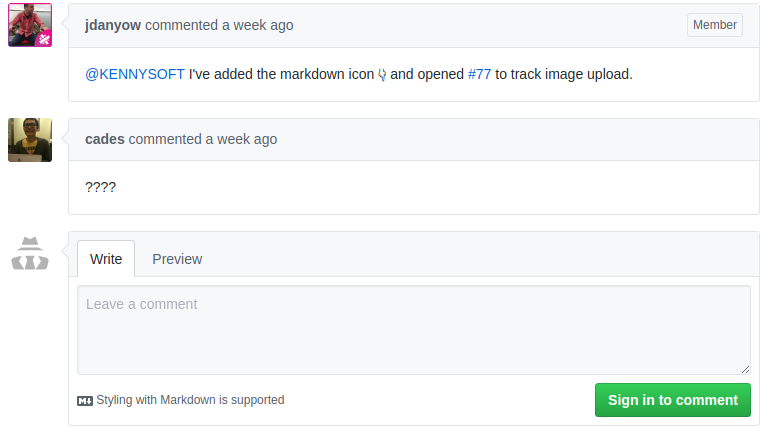 The article mentioned in the introduction also talks about integrating Github issues. This has been done with a very simple embedding script by utterances. It is flexible, reliable and simple. It is open source and coded in TypeScript. As you can see, its style mimics Github’s.

My main gripe is once again with the Github lock-in. I thought about reimplementing the API calls to the Gitlab issues API but I would rather my main repo stay on Github for the time being.

I have also reviewed other small systems such as jskomment (not reliable), HashOver (not reliable, but keep an eye on HashOver v2, under development and promising). Conversely, huge systems like Mozilla’s Coral Project Talk are well-funded and robust but way too complex for anything under enterprise-scale.

As you can see, the choice can get technical, and there is no clear winner. Important factors are the scale of your site, how much time you want to dedicate to the setup process, and which features matter to you.

I ended up picking Isso, which is the least-effort solution that provides the features I wanted:

Isso’s configuration can get involved, as there are many settings. The best way to set it up for me was to install the Debian package, which also comes with a default configuration and global install that allows you to hook it up to this systemd service unit. This allows easy management and automatic restart.

Overall, the Docker image may be a better option but my OpenVZ VPS doesn’t run it. The Debian package’s sample TOML config may be useful to mount if you go down the Docker road.

Keep in mind that the most important setting to change is host, which should be the domain of the site embedding the comments, e.g https://fedidat.com/ in my case.

I used Nginx proxy/forwarding file with TLS and HSTS support, with Certbot to generate the certificate.

Also, if using the ufw firewall, allow HTTPS traffic by running this:

Embedding Isso comments in a site is as simple as this:

There are many more customization features on the documentation.

Update 2018-01-06: My cheapo VPS provider, HiFormance, deadpooled about a week ago. So no comment box for now. I’m slowly working on the site design among many other things at the time of writing so I’d rather not invest time in non-critical things that depend on UI. I don’t know when comments will be back on my site. My personal opinion remains that Isso > all, although I am very jealous of Dmitry Shuryalov’s site in Golang with cute reactions.