GraalVM is a high-performance polyglot VM being developed by Oracle. Using one interpreter to run all sorts of languages is not new. After all, the JVM itself runs all sorts of other languages, like jython for Python or JRuby for Ruby. But GraalVM is an attempt to make the fastest VM for all languages, and then use that basis to make calls between languages very fast and convenient.

There are two major components to the Graal project: its high performance Java compiler called Graal, and a language abstract syntax tree interpreter called the Truffle framework, which allows the implementation of other languages on top on the Graal framework. Various other components like Sulong or SubstrateVM have since merged into the Graal project towards this polyglot effort.

Time will tell whether GraalVM will end up being the best option for all major languages - and for new ones too - and whether we are headed to a polyglot world. Microservices might even go out of fashion without the need to separate teams that are using different languages, although you will see that Graal can also help with these.

In any case, I think we should all know about this potentially very useful tool. For an excellent presentation, I instead strongly recommend this Youtube talk, which teaches a lot more tricks than just GraalVM related stuff.

Now for my guide. I am late to the party, after a wave of article following the open-sourcing of GraalVM in last April. So I will try to give an exhaustive review of GraalVM’s abilities after the dust settled.

GraalVM offers two editions: a free-and-open-source community edition hosted on Github and a professional edition offered on Oracle’s site. The difference is that the enterprise edition is not free for commercial purposes, without major differences between them other than support. Also note that the community edition is licensed under GPL v2. Both versions are only available on Linux and Mac.

Download the latest releases from https://github.com/oracle/graal/releases. In its bin folder you will find, among others, drop-in replacements for many utils:

There are also many other utilities, such as:

You may decide to replace your PATH utils with these ones like so export PATH=/path/to/graalvm/bin:$PATH.

As you can see, the Graal project encompasses far beyond a compiler and an interpreter, and its ambitions are big.

Since GraalVM’s java is a drop-in replacement, running a benchmark between GraalVM and OpenJDK is as simple as switching java alternatives. I used the handy GUI galternatives for this.

As a benchmark, I used the java-simple-stream-benchmark:

npm and node, polyglot with Java and Python interop

Let’s dive into a practical example of the powerful polyglot feature of GraalVM, with its strong interoperability between languages.

Since there are so many combinations between languages, this is still work in progress. For example, graalpython can still not import external modules, and Javascript has the strongest interop right now. However, all available languages can interop to some extent, which I think is amazing. This page neatly shows how to get from each language to the others.

Now, I’ll be running a Java thread race based on this demo. Here is my thread:

To make things interesting, I’ll be running it from Javascript. What’s more, I will also be using npm and node to run an express.js server. Inside my endpoint, I will be using Python to manipulate regular expressions with Javascript: that’s two levels of interop! Sounds like a lot is going on, but the code is straightforward:

Output (with one request):

And in the browser:

Although the edges are still rough, and GraalVM is far from a finished product. I think the benefit is clear: you no longer have to choose between Java’s precision, Javascript’s flexibility, Python’s practicality, R’s processing tooling, and so on. You can now combine the best tools and their libraries for each job in one simple runtime, without sacrificing simplicity or performance.

Inspct with Chrome DevTools and profile with GraalVM

By the way, let’s activate debugging and take a look at the excellent tools available. We just need to add the --inspect flag as the first argument of the node command above:

By copy-pasting the link into Chrome, we get to use the powerful Chrome Dev Tools. This parameter works for all the GraalVM interpreter tools (java, ruby, etc). 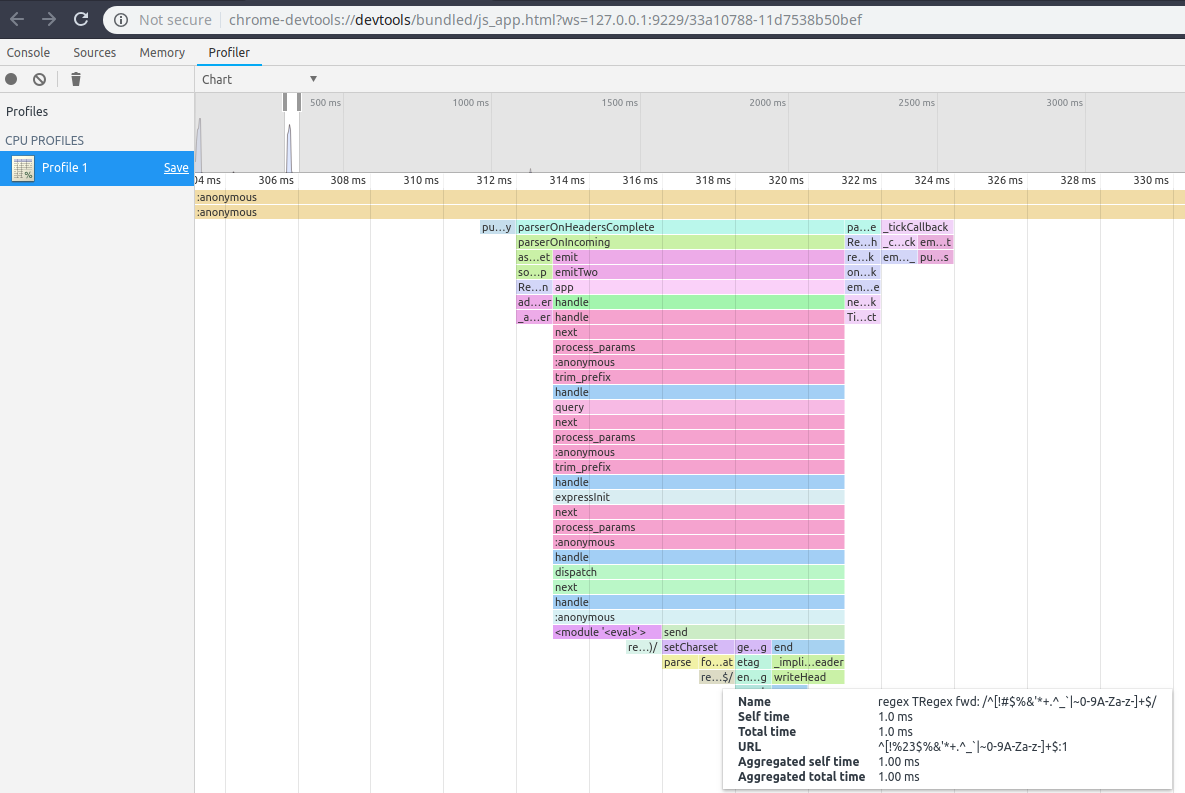 And for users of JVisualVM, the “Graal VisualVM” is included in the GraalVM release as a tool still named jvisualvm. It looks and performs just like the familiar JVisualVM.

Arguably, these may be the best versatile debugging and profiling tools available to developers today. And in addition, usual Java debuggers can be used. The mx tool provided with GraalVM creates Eclipse configurations and launchers, and its -d flag then opens a port for remote debugging.

Another highlighted feature of GraalVM is native images. These images contain a minimal and self-contained runtime. Think of the Java 9 module system but polyglot. Through the use of Substrate VM, native images can provide us with the same functionality as a Java program in a low-footprint and fast-startup package, with the added advantage of the executable having its own process name.

Sadly, SubstrateVM is still limited, in particular due to the need to link native libraries or reimplement native interfaces. So, after failing to integrate examples of image processing due to ImageIO’s low-level JNI calls not working, I will give the polyglot example featured on GraalVM’s site:

Once again, the immediate benefit of using other languages’ strong points (in this case JavaScript’s strong JSON manipulation) as native utilities is evident. Let’s make that into a native image:

While native images are usually lean, this one weighs 90MB. This is probably due to the JavaScript runtime, though it is still relatively low compared to the 400MB+ of the JVM. And here too there is room for improvement, with low-hanging fruit like unused classes on the backlog.

Although the program failed to produce newlines for me, it does validate and tidy up the JSON a bit. And the execution time was indeed remarkably lower than through the JVM, mostly due to startup times:

Now, another neat thing about native images is that we can use them as dynamic libraries. Let’s add an entry point in our previous class:

And let’s make a library:

We get a few .h files for GraalVM thread boilerplate code, another .h file with our library already including it, and finally our new library, libprettyprintjson.so:

Here is a C program to make use of our library:

The original idea of LLVM sounds similar to GraalVM: “making a modular and reusable compiler and toolchain technologies”. Frontends for languages like C, C++, Rust or Haskell produce LLVM bitcode (“Intermediate Representation” or IR) which goes through the same LLVM optimizer and is then compiled to various assembly backends. This is one of the strengths of LLVM against GCC’s more agressive but “magical” optimization techniques. Here is a representation from the AOSA book:

It turns out that GraalVM made an interpreter for LLVM bitcode, lli (formerly named project Sulong), thereby potentially replacing the backends for these languages. And there are some good reasons to do this:

I’ll skip the boring Hello Worlds in C++ or Rust, and compile a large program in C. Since Clang’s -emit-llvm flag doesn’t work when linking several files together, I’ll be using one of the large single compilation unit C programs here, namely the Ogg Vorbis encoder.

And the output jfk_1963_0626_berliner.ogg plays perfectly well. It took 1m04s to encode this WAV to OGG on my laptop. Let’s compare to a Clang-compiled version.

11 seconds, or over 5x as fast as GraalVM. Again, performance-wise, there is room for improvement.

More interesting is the old version of GCC also on that site. When compiled to LLVM bitcode and interpreted with GraalVM, it indeed produces assembly, although that version shows its age, being 32-bit.

That’s it, I hope those shortened examples gave a good review of GraalVM’s wide range of abilities. I think it is very promising, although there is still much work to do for it to win in all of these areas.